This memorandum contains the following sections:

The counties considered herein are Big Horn, Fremont, Hot Springs, Park, and Washakie. It should be noted that a small area in northwest Natrona County lies within the WBHB watershed, while a portion of the southeast corner of Fremont County lies outside it, in the Green River drainage. Both these areas are very thinly populated. In the case of the Natrona County section, its population is not incorporated in the domestic and municipal water use analysis.

There are also portions of Teton County within the watershed, but they are virtually uninhabited mountain areas. Much of Yellowstone Park lies physically within the Basin (mostly in Park County) but since its management is almost entirely federal, an analysis of Yellowstone.s water demand differs somewhat, of necessity, from that of the rest of the Basin. Although water is certainly consumed within the Park, and is accounted for in the WBHB Plan, consumption is limited to domestic use. WSEO records show no surface water rights with in the park. Ground water rights are permitted by the National Park Service for eight domestic wells. WSEO records show a total water right of 391 g.p.m. or a maximum of 630.8 acre feet per year.

The current population of the basin, according to the 2000 census, is 86,222. Statistically zero or negative growth could be projected for the basin. Although this has been the case in some counties in recent years, the basin as a whole has remained stable or has experienced some growth in population. The following figure shows the projected population growth for the basin as a whole assuming moderate growth. This projection was used for projection of water use for domestic and municipal use. 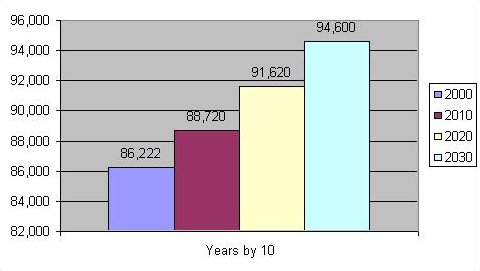 Based on Total Basin Projection for Moderate Growth

According to the U.S. Environmental Protection Agency (EPA), there are currently 58 active municipal and non-municipal community public water systems in the Wind/Big Horn Basin (Lamb, 2002). Through its water system surveys, the Wyoming Water Development Commission (WWDC) has acquired detailed information on approximately 40 of these public water systems (WWDC, 2002). Information provided in the 2002 Water System Survey indicates these systems are capable of storing more than 36.7 million gallons of water obtained from rivers, streams, wells, reservoirs, and lakes to serve more than 63,000 people, or roughly 68% of the Basin's population. The average daily municipal water use for the Wind/Big Horn Basin (Basin) is approximately 12.2 million gallons per day (MGD), or roughly 207 gallons per day per person. 68% of the total water usage by municipalities is surface water, with the remaining 32% ground water. Refer to .Municipal Water Use Profile., Chapter II, Tab 6.

Based on rural domestic and non-municipal public water system usage, total domestic water usage in the basin has been estimated to range from 6.5 to 10.4 MGD. Ground and surface water supplies are utilized to meet daily domestic demands in the basin. Of the total domestic water usage, roughly 26% is supplied by surface water sources while 74% is supplied by ground water. Although data on water quality for private domestic water sources is generally not available, in many areas the shallow aquifers accessible to these users do not meet drinking water standards.

Section 4 . Projected Municipal and Domestic Use

The following figure projects future domestic and municipal water demand based on a projection of moderate growth over the planning period. This is considered the most likely scenario. 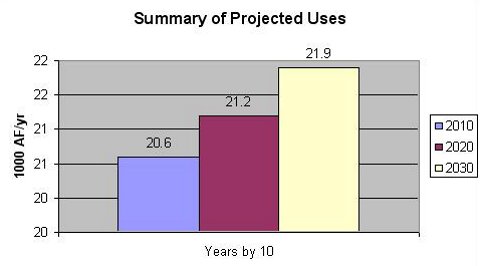 Although population projections could statistically predict zero or negative growth, water demand for the low growth scenario is projected as flat. This scenario is not considered likely since some communities are currently experiencing shortages.

The high growth scenario, .Socioeconomic Factors and Water Demand., Chapter IV, Tab 18, projects a maximum population of 114,407 over the thirty year period or a 33% increase. This population growth would result in a corresponding municipal/domestic water demand of approximately 26.5 acre feet per year.