The purpose of this Technical Memorandum is to estimate overall domestic water use in the Wind/Bighorn River Basin (planning area), which includes all or portions of the following counties: Big Horn, Washakie, Hot Springs, Natrona, Johnson, Fremont, Park, and Teton. Within this area the principal users of domestic water supplies are rural homes and non-municipal public water systems that are regulated by the U.S. Environmental Protection Agency (EPA). These public water systems are utilized by a wide variety of users, including the following: commercial establishments, national forests and recreational areas, state and national parks, campgrounds, rural schools, businesses, ranches, rest areas, and other small water users.

Within the planning area, both surface and ground water sources are used to provide domestic water supplies. Ground water from wells is used almost exclusively to provide domestic supplies to rural homes and supplies virtually one half of the water used by all non-municipal public water systems. Surface water sources provide the other half of the water used by these public water systems, and are used exclusively to provide domestic supplies at Canyon and Grant Villages in Yellowstone National Park. Surface water is also used on a limited basis by many rural homes to irrigate lawns and gardens.

EPA reported the population served by these non-municipal public water systems was 34,287 people, of which 74.1% were located in Yellowstone National Park in Teton County. LA anticipates that they only use a limited amount of water, and that this usage is seasonal given the high population percentage attributable to Yellowstone National Park. To estimate domestic water usage from these 115 public water systems, LA assumed an estimated usage rate of 75 gallons per capita per day (gpcpd). This assumption yields an estimated domestic water usage of 2.57 million gallons per day (MGD).

Because ground water is predominantly developed for domestic supplies in rural areas, LA obtained the State Engineer Office.s (SEO) database of wells to access information on domestic wells. This database includes the permitted water right for each well, however, this amount is generally not representative of actual water use. Because wells are typically only used periodically, the total annual volume of water used is considerably less than the well could produce if it were pumped continually. It is also likely that some of the permitted domestic water rights are inactive.

To assess their spatial distribution in the planning area, LA aggregated, tabulated, and included water rights for domestic wells to create a well information layer in the basin GIS, as shown on Figure 1. Each domestic well was geospatially located with the GIS. The representative dot for each well in the GIS layer is linked to tabular data obtained from the SEO. As provided by the applicant, available data for these wells include: location, permit number, status, use, applicant name, facility name, whether the permit is an enlargement of a previous appropriation, priority date, completion date, well yield, well depth, static level, and depth of water bearing zone.

LA utilized population data rather than water rights for ground water wells to estimate domestic water usage in the planning area. LA estimated rural domestic water use on the basis of the rural population served by wells in combination with assumed per capita usage rates. Year 2000 census information, sorted by county, was obtained from the U.S. Census Bureau. Estimates of population served by municipal systems covered under the Municipal Use Technical Memorandum were then subtracted from the total county population to estimate the number of domestic users. Table 1 summarizes the population served by community public water supplies and the estimated rural population for Big Horn, Fremont, Hot Springs, Park, and Washakie Counties using the method just described. For the approximately 19 domestic wells that are located within the planning area in Natrona County, LA estimated domestic water use based on average household size, the number of wells, and an assumed per capita usage rate.

As shown on Figure 1, almost 83% of rural domestic water supplies are predominantly derived from wells located in Fremont and Park Counties. Fremont County contains approximately 59% of the estimated rural population, while Park County is inhabited by roughly 23.7%. The high density of wells in these counties is illustrated on Figure 1. Based on their locations, it appears that the Alluvial, Wind River, Willwood, and several Paleozoic Aquifers provide the majority of ground water used for domestic purposes in rural areas, not only in Fremont and Park Counties, but throughout the planning area.

Both ground and surface water supplies are utilized to meet daily domestic demands in the planning area. Of the estimated 6.5 to 10.4 MGD that are used, roughly 26% is supplied by surface water sources while 74% is supplied by ground water. Yellowstone National Park is the primary surface water user and obtains most of its water supplies from the Yellowstone River and Yellowstone Lake. Rural domestic water users consume approximately 58% of all ground water used for domestic purposes, while non-municipal public water systems in Yellowstone National Park and the rest of the planning area use roughly 23% and 19%, respectively. 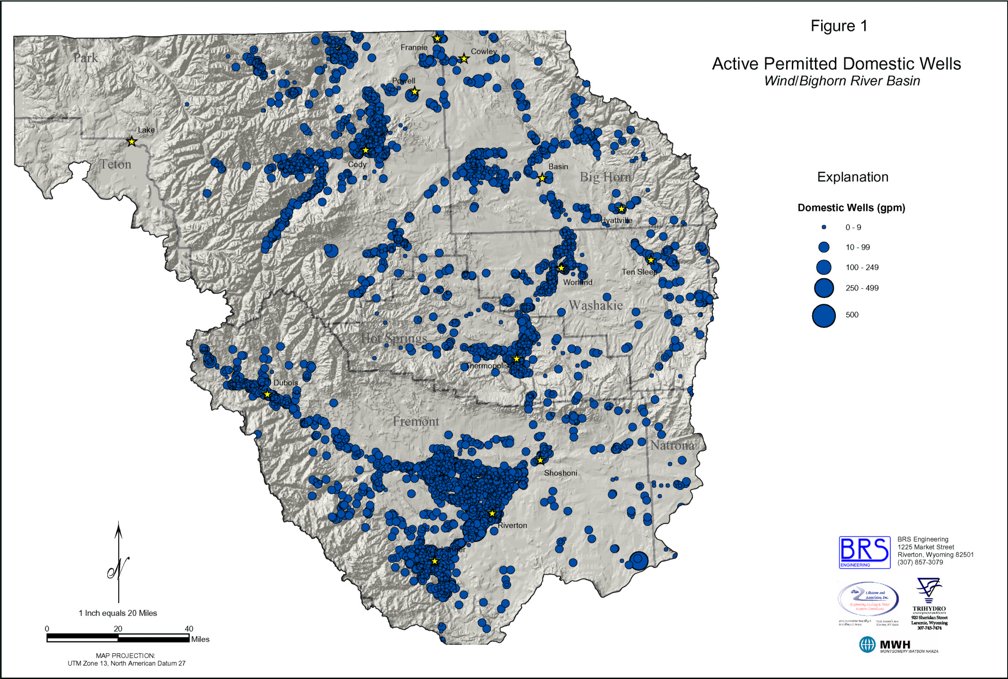