The Irrigated Lands and Water Rights GIS dataset is the most important, and complex, of the GIS themes produced in conjunction with the seven river basin plans. The dataset consists of:

Another relationship was established between the PODs and the water right permits. This is also a many-to-many relationship. One physical POD (e.g. headgate) may have more than one permit associated with it. It is also possible, although less common, for a single water right permit to have multiple PODs (e.g. sprinkler systems).

By employing both of these relationships, it is possible to relate PODs and irrigated polygons.

Although all seven basin plans used similar techniques to capture the data, there is considerable variation between plans in how the data is modeled, related, and presented. This is discussed in more detail in the following section.

A "linking" table is always required in many-to-many relationships. A simple example below illustrates the role of the linking table: 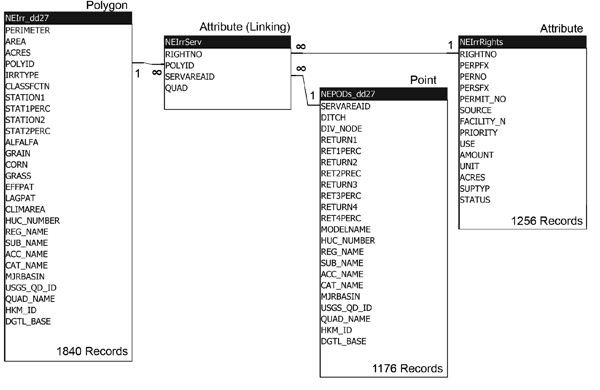 This four table model is the most rigorous of the various data models used in the basin plans, and it was used in four of the seven basin plans, therefore it was selected as the model for the statewide coverage. Data from the three basin plans that did not use this model (Bear, Green, Snake/Salt) was reformatted and normalized to conform to the four table model. This was a significant effort and is detailed below for each river basin.

The irrigated land polygons were supplied in both shapefile and E00 format. The shapefile data were digitized at a much finer level of detail. The E00 data was not used. 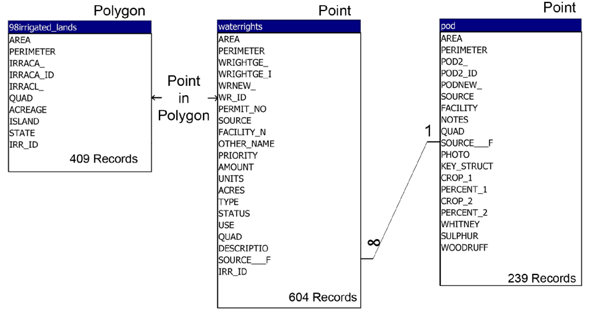 Water right permits were represented in a spatial table as point objects. The points were simply placed within an irrigated polygon and had no other spatial significance. (per Heather Justice, Leonard Rice Consulting 8/28/2006)

Irrigated polygons were split on 7½ minute quad boundaries. In some instances this created sliver polygons that did not have any attribute data (they had no permit table point within them). In other instances, duplicate water right permit points were placed in each .half. of a split polygon. Therefore, the 7½ minute quad boundaries were dissolved for the state-wide coverage.

The POD table is related to the Permits table by the SOURCE_F field, which is a concatenation of the SOURCE and FACILITY_NAME fields. 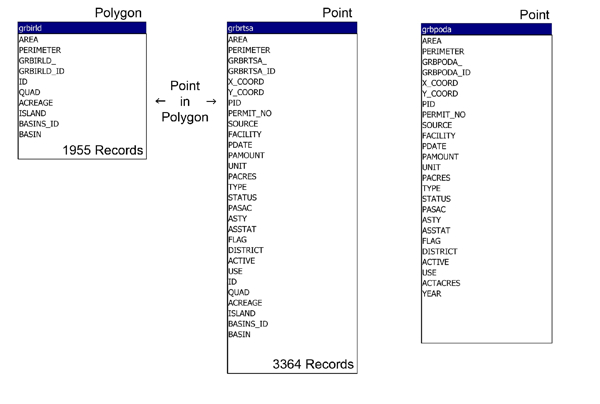 POD processing: Each POD permit had a point object, thus a single physical POD (e.g. headgate) was usually represented by multiple points (one for each permit). The PID field identified unique physical PODs. The POD permits table was split into a spatial table and an attribute table, which are related by PID. Duplicate points objects were deleted so that the PID was unique in the spatial table.

Permit processing: At this point we had two water right permit attribute tables; the irrigation permits (related to the irrigated polygons) and the POD permits (related to POD points) and the two tables contain duplicate permits. The two tables were merged into a single table of unique permits. Unique permits were identified by PERMIT_NO for non-territorial water rights, and by a combination of DATE, SOURCE, FACILITY, and PAMOUNT fields for territorial permits. Relationships to the irrigated polygon table and POD point table were preserved in the linking table.

The Snake/Salt River Basin data model was very similar to the four-table model selected for the state-wide coverage; spatial objects in the irrigated lands and POD tables are linked to a shared attribute table of water right permits. The main work required to normalize the data was to separate the key fields into a separate linking table.

The source data model is shown in the ER diagram below.

The irrigated land polygons within the Wind River Indian Reservation were developed by the Wyoming State Engineer's Office and States West Water Resources Corporation in conjunction with the 1982 Bighorn River General Adjudication. Water rights were granted as a result of this action. These water right polygons were classified as .Water Awards. in the Wind/Bighorn (WB) river basin GIS data, however no distinction was made between irrigated and un-irrigated land. The un-irrigated land within the Water Awards is referred to as "Tribal Futures" in the Basin Final Report, but could not be identified in the GIS data.

The only modification of the original data was the change of the CLASSCTN attribute value from "Water Awards" to "un-irrigated tribal futures water awards". These polygons still link to the water right permits table as they have valid water rights. However these polygons can be excluded from analysis by filtering on the CLASSCTN column.