There is a significant amount of recreational activity within the Snake/Salt River basin. People travel from around the world in order to boat, fish, ski, camp, and hike in this part of Wyoming. Tourism has a major impact on the economies of the communities in the basin, with much of the tourism being linked to Grand Teton and Yellowstone National Parks. Many of the draws of these parks are water related, with the most notable water features within the basin being Jackson Lake and the Snake River. The Snake River is also a major draw throughout the Jackson Hole area as well as through Snake River Canyon toward Alpine, sometimes referred to as the Grand Canyon of the Snake River. Thousands visit the river each year for rafting, kayaking, fishing, and other activities. In addition to the Snake River and Jackson Lake, there are numerous rivers, streams, and lakes throughout the basin that are used for recreation. Other activities that utilize or require water in some form include waterfowl hunting and winter sports such as skiing. Much of the water based recreation in the basin takes place in areas that are managed by public entities, such as the National Park Service, Forest Service, Bureau of Land Management, and the State of Wyoming. This technical memorandum will look at these various types of water-based recreational activities throughout the Snake/Salt River basin.

Grand Teton National Park is the largest tourist destination located entirely within the basin. There are many water-based recreational activities that draw people to the Park. The main focus of recreational water use in the park is divided between Jackson Lake and Snake River.

Most of the use of Jackson Lake is by private individuals participating in various activities, such as motorboating, pontoon boating, canoeing, kayaking, camping, and fishing. In the winter, activities such as ice fishing, cross country skiing, and snowshoeing are common. Many ice fisherman have used snowmobiles or snow planes for transportation across the frozen lake. The Park Service has concessioners that provide services such as boat rentals, scenic lake tours, guided fishing trips, and marina services. Boat launching is available at Leek’s Marina, Colter Bay, Spaulding Bay, and Signal Mountain. Data obtained from Grand Teton National Park outlining visitors using Park concessioners for water-related recreation are shown in Table 1.

Table 1. Grand Teton National Park Visitors by Use (Concessioner Use)

There are approximately 19 lakeshore camp sites located at 10 locations around Jackson Lake that are accessible only by boat. Other campgrounds adjacent to the lake include Lizard Creek, Colter Bay, and Signal Mountain. Grand Teton National Park requires all privately owned vessels to have a park permit. A breakdown of boat permit sales for 2001 are shown in Figure 1. 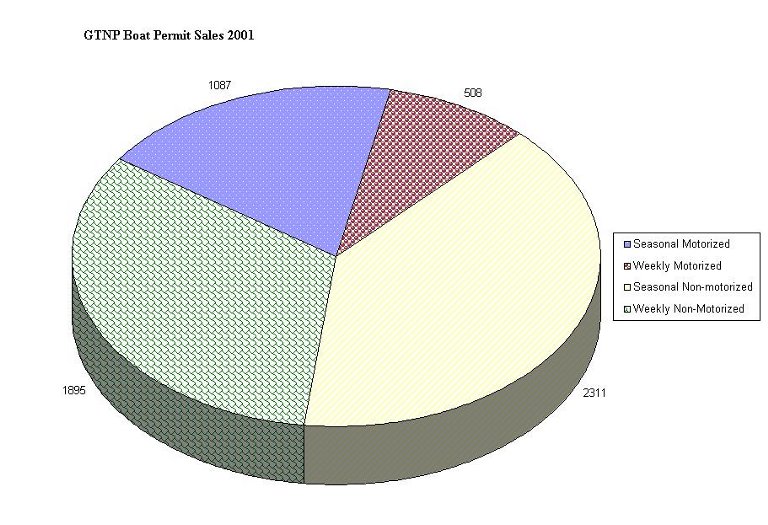 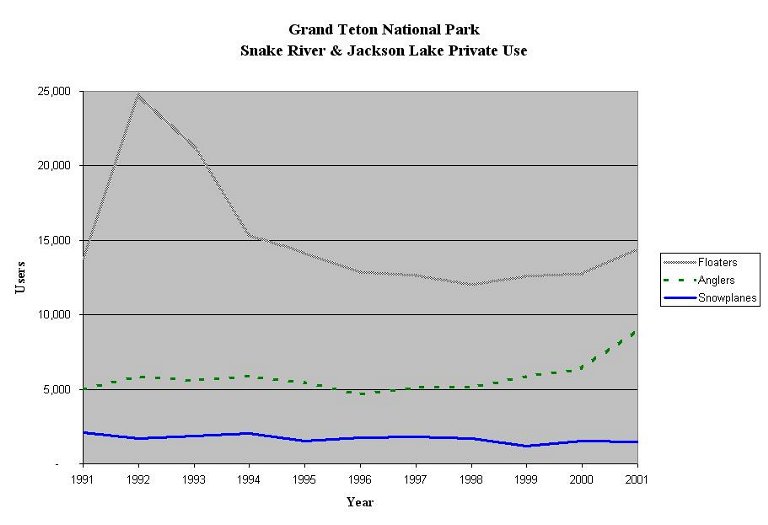 Activities on the Snake River within the Park include canoeing, kayaking, float trips, and fishing, with these activities being conducted by private individuals as well as concessioners. Data regarding these uses have been shown previously in Table 1 and Figures 1 and 2. Access locations along the river are at Southgate, Flagg Ranch, Lizard Creek, Jackson Lake Dam, Cattleman’s Bridge, Pacific Creek, Deadman’s Bar, Schwabacher Landing, and Moose. Current regulations prohibit floating the river from December 15 to April 1.

There is significant use of the Snake River within the Bridger-Teton National Forest. A majority of the use consists of rafting, boating, and kayaking in Snake River Canyon between Hoback Junction and Alpine. In this area, there are also six campgrounds maintained by the Forest Service. Many commercial rafting outfitters use this area as part of their rafting business. Statistics regarding the use of the river by rafters, both commercial and non-commercial, are kept by the Forest Service and are shown in Table 2.

Table 2. Snake River Rafting Use – Bridger Teton National Forest * Non-outfitted numbers reflect number of persons coming to the river, and not the number of times those persons ran the river in a given visit. Noncommercial users average 2-3 trips down the river in a given day of use. Noncommercial numbers are estimates based on periodic counts, reviews of river photographs and group permit numbers. **The decrease in noncommercial use in 2001 is a result of enforcement of the large group permit system required by the Snake River Management Plan.

The above mentioned recreational activities take place throughout the forest, which has numerous rivers, streams, lakes, and ponds.

The three ski areas utilize snowmaking during the early season, which can be from mid-October through January. Snow King snowmaking typically starts in October to accommodate World Cup race training prior to the season opening. According to the technical memorandum prepared by BBC Research & Consulting entitled “Future Water Demand Projections”, typical water usage for snowmaking are roughly 1.25 millions gallons per season at Grand Targhee, 20 million gallons per season at Snow King, and 80 million gallons per season at Jackson Hole Mountain Resort. While all three resorts have installed snowmaking facilities on portions of their ski areas, the success of the ski season is dependent upon natural snowfall. Typical snowfall amounts for the resorts are 500 inches per year at Grand Targhee, 400 inches per year at Jackson Hole Mountain Resort, and 150 inches per year at Snow King.

There is generally adequate snowfall across the basin to support winter sports at locations other that the ski areas. Other activities such as cross-country skiing, snowshoeing, and snowmobiling are popular, and miles of trails are groomed throughout the basin for use by snowmachiners and skiers. Also, the annual World Championship Snowmobile Hill Climb has been held at Snow King for over 25 years.

Fishing is a significant recreational activity throughout the Snake/Salt River basin. According to the Wyoming Fishing Guide produced by the Wyoming Game and Fish Department, “[Yellowstone] Park remains one of the meccas of American trout fishing.” Also, “fishing the Snake River in Grand Teton National Park is like stepping into a photo mural. The experience would be worth a king’s ransom even if there were no trout. In fact, there are trout – lots of them. The Hoback and Greys rivers, Flat Creek, and Jackson Lake also provide excellent fishing in this region.” Fly fishing dominates on the Snake River, and the significant game fish in the basin are shown in Table 5.

According to the Wyoming Game and Fish Department, many of the streams and lakes in the basin are managed to preserve the indigenous Snake River Cutthroat Trout as well as to preserve wild trout fisheries. Maintaining the supply and increasing the diversity of sport fishing in the basin is also a management goal of the Department. There are also trophy fish in the area, as evidenced by two state record fish. A 50 pound lake trout was caught in Jackson Lake, and a mountain whitefish over 4 pounds was caught in the Snake River.

There is a variety of lakes and streams in the basin that provide a wide range of fishing experiences, from small wilderness streams and lakes to the Snake River and Jackson Lake. Some areas, such as Jackson Lake, see a considerable amount of ice fishing in the winter. A document produced by the Game and Fish Department entitled “Jackson Fish Management - Sub-basin Management Plans” in 1995 contains data on fishing in the Snake/Salt River basin. In this report, the basin has been broken into various sub-basins, with information on the existing fishery and future management plans outlined for each sub-basin. Table 6 provides a summary of selected data from this report from each sub-basin.

In the Snake/Salt River basin, the Snake River is the only Class 1 or blue stream. The Salt and Greys Rivers are Class 2 or red streams. The stream classifications are presented as a GIS theme as part of this basin plan.

Waterfowl hunting is another recreational activity that is possible due to water features in the basin. The Snake/Salt River basin is located between the Central and Pacific Flyways, which are major routes for migratory birds between Canada and Mexico. The major route of the Central Flyway is in the Midwest through the states of Nebraska, Kansas, Oklahoma, and Texas. The major route of the Pacific Flyway is along the Pacific Coast through Washington, Oregon, and California. The Wyoming Game and Fish Department distinguishes between the two flyways using the Continental Divide, with the Central Flyway on the eastern portion of the State and Pacific Flyway on the western portion. While the basin is not directly in a major flyway route, there are a significant number of birds that migrate through the area, and there are numerous locations that attract waterfowl as well as hunters. The Wyoming Game and Fish Department reports data regarding the hunting of waterfowl, as well as other birds and small game, in the Annual Report of Upland Game & Furbearer Harvest. The trends in harvest of the most commonly hunted waterfowl in Wyoming, ducks and geese, are shown in Figure 3 as taken from the annual report for the 2000 hunting season. Estimates on waterfowl hunting activity in various sub-basins in Wyoming are made by the Wyoming Game and Fish Department, and are also included in their annual report. These estimates cover the number of hunters, the number of days they hunted, and the harvest of waterfowl. This data for the 2000 hunting season is presented in Table 7 for ducks and Table 8 for geese. 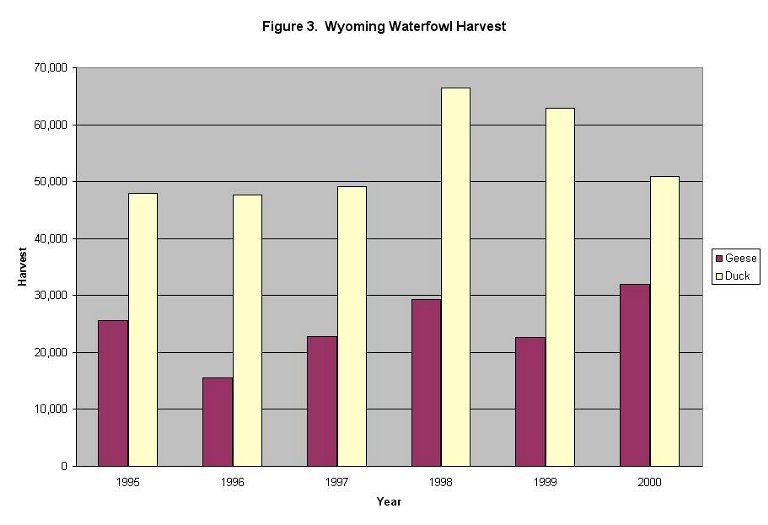 While recreation is generally a non-consumptive use of water, it is a very important part of life in the Snake/Salt River basin. A large portion of the economy is driven by tourist activity, most of which is due to the recreational opportunities in the area. Different forms of recreation are enjoyed each season of the year. These opportunities are available due to the water resources in the basin, which are renewed annually through the hydrologic cycle. Recreation also contributes greatly to the quality of life for those who live in the basin. Snake/Salt River Basin Plan