Wyoming water law originated during territorial days and is based on the doctrine of prior appropriation. Under this scenario the first person to put water to beneficial use has the first right, which is also referred to as “first in time is first in right.” As a result, water rights in Wyoming are regulated by priority, as they are in most of the western states. This means that the earliest rights are entitled to water during periods of limited supply, while those with later rights are denied water during these times (Jacobs, et al.). Additional information regarding Wyoming water law can be found in the technical memorandum “Snake/Salt River Basin Plan, Wyoming Water Law” prepared by Fassett Consulting.

The Wyoming Constitution states that water of all natural streams, springs, lakes, or other collections of still water is the property of the State, and is administered through the State Engineer. Water division superintendents administer the water within each of the four water divisions in the State, with assistance from local water commissioners and hydrographer-commissioners. Prior to 1986, Wyoming water law stated that water must be diverted and conveyed in order to be beneficially used. However, the passing of the Instream Flow Law in 1986 changed this to allow water to be left in the stream for a beneficial use, such as for fisheries. This instream right can only be held by the State of Wyoming, and the priority system still applies to these rights.

After much debate, the instream flow law was passed by the Legislature in 1986. The law had been rejected by the State Engineer prior to this, as it was generally accepted that water must be diverted to be beneficially used. Also, there were questions regarding the abandonability of the rights since it was not diverted. According to Jacobs, et al., the Wyoming Legislature declared in 1986 that instream flow for maintenance or improvement of existing stream fisheries is a beneficial use of water that can be provided from natural streamflows or from storage water. The instream flow process includes three State agencies, which are: the Game and Fish Department, the Water Development Commission, and the State Engineer’s Office. The Game and Fish Department first selects the stream segment on which to file for a right. This is done using biological reports, knowledge of the fisheries, and stream flow models, along with determination of how much flow will be required. The Wyoming Water Development Commission then applies for the appropriation. The WWDC must also conduct a hydrologic study to determine whether the instream flow can be provided from the natural flow of the stream or whether storage water from an existing or new reservoir will be needed for part or all of the instream use. The WWDC study is then supplied to the State Engineer for his consideration.

After receiving reports from the Game and Fish Department and WWDC, the State Engineer may conduct his own evaluation of the proposed appropriations for instream use. Before granting or denying a permit for instream flow in the specified stream segment, the State Engineer must conduct a public hearing and consider all available reports and information. In the past, public involvement has ranged from very little to quite significant. Following the public input period, the State Engineer decides whether or not to approve, approve with modifications, or reject the application. If granted, an instream flow permit can contain a condition for review of continuation of the permit at a future time. Also, the Wyoming Water Development Commission is named as holder of the permit.

Only municipalities can condemn an instream flow right. However, within one mile of the State border, the water for an instream flow right is still open to appropriation. This allows for additional utilization of water prior to the flow leaving the State. Existing water rights cannot be condemned for instream flow, however, they can be gifted to the State for instream use. This has not happened as yet. As for regulation of water rights on a stream, this must be called for by the Game and Fish Department with the request proceeding through WWDC. Instream flow rights do not ensure ingress and egress rights to the stream for public use, however, the Game and Fish Department has tried to ensure that the segments with instream rights have public access as well. Also, these rights cannot be issued if they will limit Wyoming’s use of water with respect to interstate compacts. This will be reviewed with all of the pending applications in the Snake/Salt River basin. 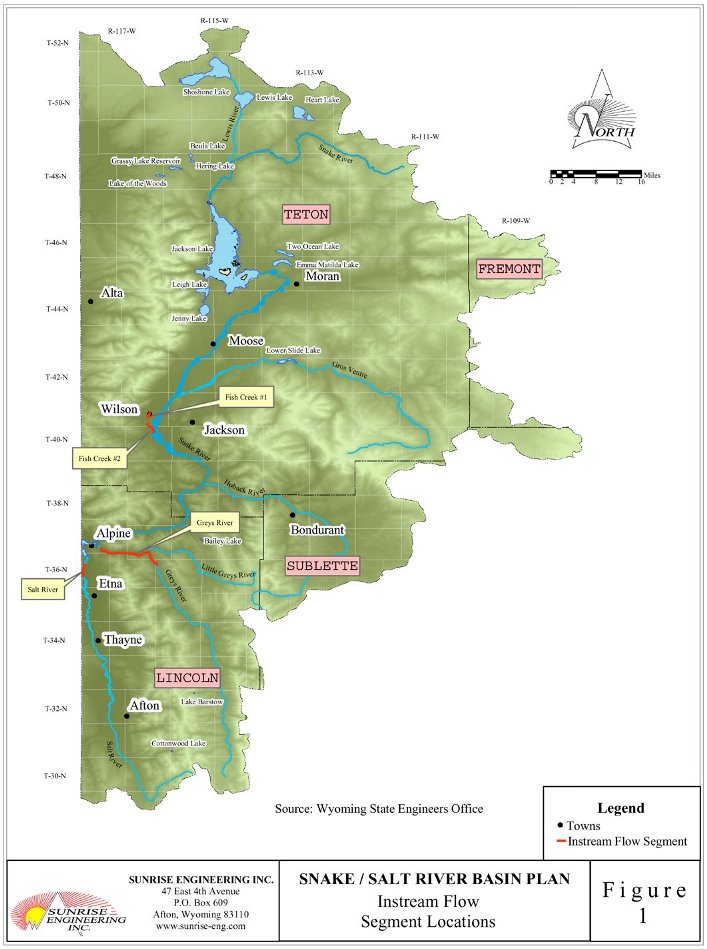