Information summarized in the memorandum was gathered from publicly available secondary sources and from personal and telephone interviews conducted by BBC Research & Consulting (BBC) from April through July 2002. References are listed at the end of this memorandum. Subsequent memoranda related to water demand forecasting describe the three alternative planning scenarios and the overall economic and demographic projections for the Basin in year 2032 (Memo 2), and the water demand projections for year 2032 (Memo 3).

At present, nearly 26,000 people reside in just over 10,000 households within the Wyoming portions of the Snake and Salt River Basins. Roughly 44 percent of the population of the Basin lives within the boundaries of the City of Jackson or the Towns of Afton, Alpine and Thayne, the four principal population centers within the Basin. These municipalities also account for 45 percent of Basin households.

Source: Wyoming Department of Administration and Information, Division of Economic Analysis. Profile of General Housing Characteristics by County and Place, 2000. Census Tracts from 2000 Census of Population and Housing, Census 2000, Bureau of the Census.

Changes in census tract definitions from decade to decade and the imprecise relationship of census-defined geography to the watershed make it difficult, if not impossible, to precisely quantify historic population totals for the unincorporated portions of the Basin. However, population changes in the four principal communities that comprise a good portion of the Basin’s population can be readily tracked over time from the decennial censuses.

Exhibit 2. Population of Lincoln and Teton Counties and the Towns of Alpine, Afton and Jackson, 1950 to 2000 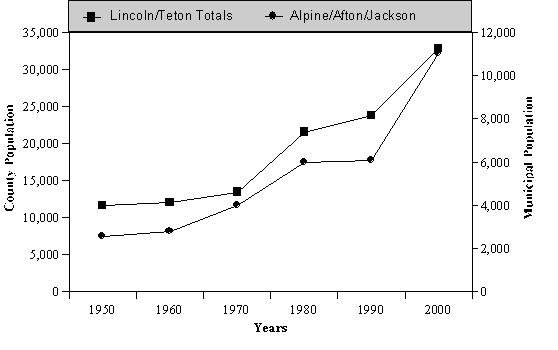 From resident births exceeding resident deaths, termed “net natural population increase,” the combined population of Lincoln and Teton Counties has generally increased by between 150 and 450 residents per year since 1970 according to data from the Wyoming Department of Health. However, population changes in these counties have historically been driven primarily by migration to or from the area, presumably in response to changing economic opportunities. Exhibit 3 portrays total annual changes in population and annual net migration for the two-county area from 1970 through 2000. Total annual population changes for each county were calculated from annual population estimates reported in the U.S. Department of Commerce, Bureau of Economic Analysis, Regional Economic Information System (BEA-REIS). With the exception of the five-year period in the late 1980’s, the Lincoln-Teton county region has maintained relatively steady levels of growth, driven largely by in-migration to the region.

Exhibit 3. Components of Population Change, 1970 to 2000, Lincoln and Teton Counties 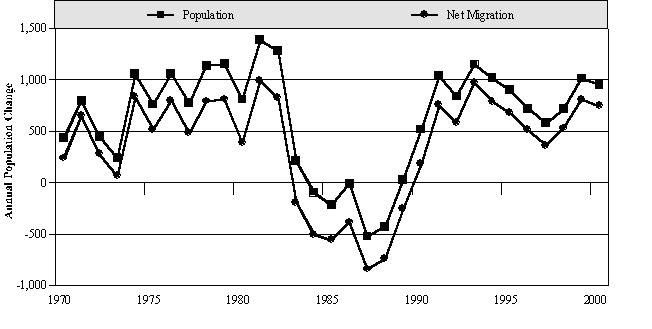 A high proportion of Basin residents between the ages of 18 and 65 are currently active in the labor force. County level figures based on labor force estimates published by the Wyoming Department of Employment and estimates of population between the ages of 18 and 65 from Census 2000 indicate that about 92 percent of Teton County residents and are either employed or actively seeking work, compared to the state average labor force participation rate of about 87 percent. The participation rate in Lincoln County is lower than the state average, at 79 percent.

Exhibit 4 depicts historical employment growth for Lincoln and Teton counties (graphed against the left axis) and the State of Wyoming (graphed against the right axis) from 1970 through 2000. Over the past three decades, Teton County employment has grown at a rapid and increasing rate. Especially during the decade of the 1990’s, employment growth has outpaced the rate of growth for the State of Wyoming as a whole. This rapid growth reflects the continued development of the tourism industry in Teton County. In general, Lincoln County employment growth during the past three decades has been much slower than either Teton County or the State of Wyoming as a whole. An exception was the brief period of power plant construction during the mid-1980’s; growth in county employment fell back shortly thereafter to rates comparable to the pre-construction period.

Exhibit 4. Total Employment Growth: Lincoln and Teton Counties and the State of Wyoming, 1970-2000 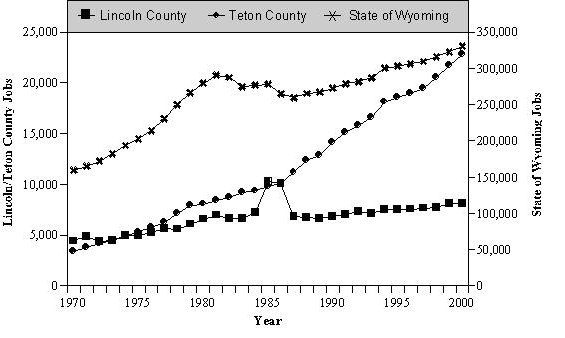 Employment and Earnings by Sector

Exhibit 5, based upon BEA-REIS data for 2000, depicts the share of total employment in Lincoln County, Teton County and the State of Wyoming for each major industry division. County data were utilized to present this distribution since Basin specific totals were not available. As indicated in the exhibit, the three largest employment sectors in both Lincoln and Teton counties (as well as in the State of Wyoming) are services, retail trade and government.

Exhibit 5. Composition of 2000 Employment by Sector for Lincoln and Teton Counties, Wyoming, and the United States 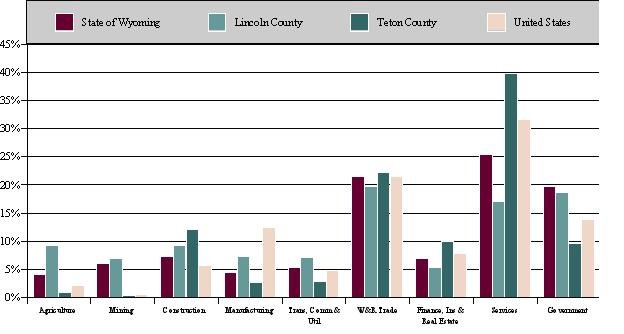 Comparing shares of county employment and employee earnings to state averages can be useful in indicating the categories of economic activity that bring money into the local economy. Such categories comprise the economic base of the local economy. Since only the northern part of Lincoln County lies within the Snake/Salt River Basin, however, the sectoral distribution presented in Exhibit 5 above does not precisely reflect the Basin’s employment distribution. For example, almost all employment in the Mining and TCU sectors occurs in the southern half of Lincoln County, which is outside the Basin’s boundaries.

Exhibit 6, also based on BEA-REIS data for 2000, depicts the relative proportion that each major industry division contributes to total earnings in Lincoln County, Teton County, and the State of Wyoming. While the graphic does highlight distinct differences in the economies of Lincoln and Teton Counties, it is important to remember that county boundaries and Basin boundaries are not identical. Important sectors in Teton County include the Construction and Trade and Services sectors - each important components of a thriving tourist-based economy. In contrast, significant sectors for Lincoln County include the Mining sector and Government sector, more typical of a western rural county with a large share of federal lands. For purposes of characterizing the economy of the Snake/Salt River Basin, however, this is somewhat deceptive since almost all of the mining activity occurs in the portion of Lincoln County. Transportation and public utilities also accounts for a comparatively large share of Lincoln County earnings due to operations of the power plant near Kemmerer — which is also outside the Basin.

Exhibit 6. Composition of 2000 Earnings by Sector for Lincoln and Teton Counties, Wyoming, and the United States 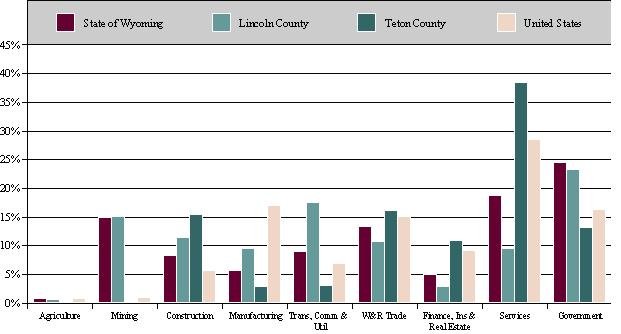 Key Economic and Water Use Sectors

The remainder of this memorandum describes current conditions in two key sectors in the Basin. Agriculture, while no longer one of the largest sources of employment or income in the Basin, still accounts for the largest amount of water use. Tourism and visitor related activities are a large and increasingly important component of the local economic base.

In order to understand current agricultural activity in the Basin and the factors affecting local agriculture in the future, BBC interviewed relevant personnel from a variety of federal and state land management and agricultural agencies. BBC also interviewed representatives of several livestock operations currently operating within the Basin. BBC also gathered and analyzed current and historic livestock and hay production data for the Basin counties published by Wyoming Agricultural Statistics Service. In addition, BBC obtained information on current and historic stocking levels for livestock grazing allotments within the Basin from the United States Forest Service (USFS), the Bureau of Land Management (BLM) and the National Park Service (NPS). The following is an abbreviated summary of current agricultural conditions in the Basin.

The tourist economy within the Basin is vibrant and growing, with over 2.5 million visitors per year (Collins). Peak tourist season is still the summer, but winter use is noticeably on the rise, and the shoulder seasons are getting shorter and shorter. In order to gain local insight into tourism and visitor related activity in the Basin, BBC interviewed representatives of the Teton County Planning Department, planners for Grand Teton National Park, Recreation Specialists for the Bridger-Teton National Forest, and a variety of recreation service providers in the area. BBC also collected extensive secondary data on recreational activities and associated visitor days from both the USFS and the NPS.

The following is a brief summary of current tourism and visitor related activity in the Basin. 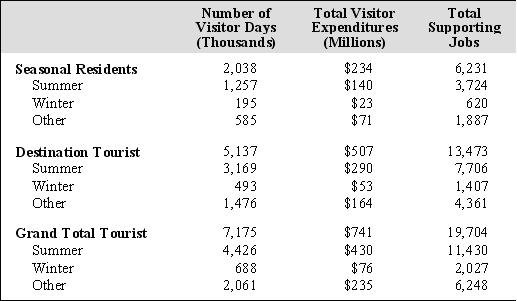 At present, there are approximately 26,000 residents living in the Wyoming portions of the Basin. The population of Basin counties grew rapidly during the 1970’s, slowed considerably during the 1980s and has resumed comparatively rapid growth during the 1990s. About 28,000 jobs are located within the Basin, many of which are part-time. Employment is highly seasonal, especially in Teton County. Most jobs in the Basin are held by residents in the northern Lincoln and Teton Counties, although some jobs in the Basin are filled by residents of nearby Teton county Idaho. The most important sector of the Basin's economic base is tourism and visitor related activity. Agriculture is not as large a factor in the local economy as it was in the past and continues to steadily decline, but remains an important sector from the standpoint of Basin water use.

U.S. Department of Commerce, Bureau of Census, 2000 Census of Population and Housing. http://factfinder.census.gov/servlet/BasicFactsServlet

U.S. Department of Commerce, Bureau of Economic Analysis, Employment by Industry for Lincoln and Teton Counties, 2000. Published online at http://eadiv.state.wy.us/i&e/i&e.asp.

Wyoming Department of Administration and Information, Division of Economic Analysis, Profiles of General Housing Characteristics by County and Place, http://eadiv.state.wy.us/housing/HU_2000.htm.

Report on the Economic Impact of the Travel Industry in Wyoming, 1999, 2000, Morey and Associates/ Department of Economics, University of Wyoming.