The types of crops grown in the Snake/Salt River basin are greatly influenced by climate. Typical farmland in the basin is located in the high mountain valleys where there is low to moderate precipitation. These valleys have relatively short growing seasons and long winters with significant accumulations of snow. Hard frosts have been observed in every month of the year. Because of these conditions typical crops consist of alfalfa, small grains (mainly barley with some oats), and native hay and grass. In addition to these crops, the portion of the study area that is in the Teton River sub-basin also produces a small amount of potatoes.

As part of the effort to model the surface water features in the basin, the consumptive irrigation requirement for the crops being raised was determined. This requirement for water by the plant varies by crop type as some plants require more water than others. Obtaining a distribution of the various crops in the basin allows for an estimate of the water used during specific conditions of irrigation.

Data regarding the types of crops grown in the basin were obtained from various sources such as the USDA Service Center, Wyoming Agricultural Statistics, and the Census of Agriculture. However, this data was difficult to use as it covered all of Lincoln County while the basin covers only the northern portion of the county. Also, agricultural activities tend to be under-reported in these types of reports as many farmers do not respond to surveys and questionnaires regarding their farm activities. The most extensive data was obtained through interviews with those involved with individual irrigation districts and canal companies. It is important to note that in some locations crops are rotated between alfalfa and small grains, and that the acreage of each crop will vary somewhat every season.

The 1972 Water Plan for the Snake River basin outlined the crop distribution in the basin at that time. This distribution is shown in Table 1. The plan also estimated another 15,000 acres of barley and hay were dry farmed.

Crop distribution data was collected from the U.S. Department of Agriculture National Agriculture Statistics Service (http://www.usda.gov/nass/) [new link 10/2009 HERE], which consisted of the 1997 Census of Agriculture. However, a newer estimate of crops being grown was available from the Wyoming Agricultural Statistics Service (http://www.nass.usda.gov/wy/) [new link 10/2009 HERE], which had data for irrigated crop types by county for 2000. A summary of this data is shown in Table 2. The difficulty with using this data is that the Snake/Salt River basin contains only a portion of Lincoln and Sublette counties, and the data pertaining to lands within the basin cannot be broken out separately.

Discussions were held with the Farm Service Agency, Natural Resources Conservation Service, and the Star Valley Conservation District, all of which are located in Afton. These agencies did not have additional crop statistic data beyond the above mentioned agricultural statistics that would distinguish the Star Valley area from the rest of Lincoln County.

In order to estimate the distribution of crops grown in the Snake/Salt River basin, information was obtained from various ditch operators as well as from Water Division III Hydrographers. These estimates are based on knowledge of the area and of the crops grown by various producers. Other sources of crop information such as crop records or detailed aerial photography were not available for analysis.

In order to determine the crop distribution for the Snake/Salt River drainage, data for each of the major diversions as found in the Irrigation Diversion Operation and Description Memorandum was used. The types of crops irrigated by each of the diversions was determined as part of that memo. Generally, the determination of crop types as well as the acreage of each crop was obtained from those involved with each ditch, such as water masters, producers, and hydrographers. The assumption was made that the crop distribution in each sub-basin roughly followed the distribution of the major ditches combined. In addition to information regarding individual ditches, crop distributions were also estimated by sub-basin in some cases by those with local knowledge of the crops. The crop categories used in this distribution were similar to those used in other previous basin studies and consisted of alfalfa, small grains, pasture grass, and mountain meadow hay. The distinction between pasture grass and mountain meadow hay is based on the method of irrigation, with pasture being sprinkler irrigated and mountain meadow hay being flood irrigated. The resulting distribution of irrigated crops is shown in Table 3. Also, a visual depiction of the crop distribution by sub-basin is shown in Figure 1. The determination of consumptive irrigation requirements used as part of the surface water modeling incorporated this crop distribution. As part of the crop distribution, it was determined that approximately 5% of the Teton sub-basin crops consisted of potatoes. However, the study conducted to determine consumptive use and consumptive irrigation requirements for crops did not include data on potatoes. As a result of the lack of water use data as well as the relatively small amount of potatoes grown, it was determined that a separate crop category for potatoes would not be created. In addressing the use of water by potatoes, studies were consulted that contained data on potatoes and other crops such as alfalfa and small grains. In a study conducted at the University of Idaho, the consumptive use and consumptive irrigation requirement for potatoes was found to be closest to that of small grains. As a result, the acreage for potatoes was included in the grain category for this study. 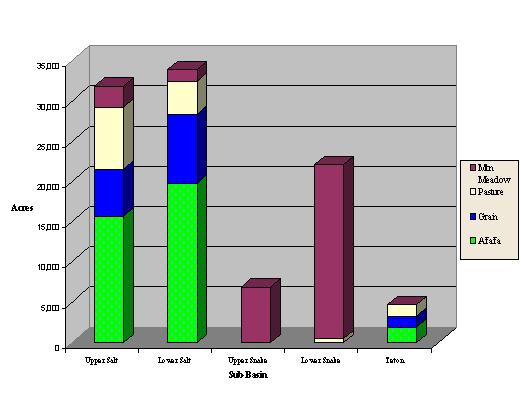