The purpose of this Technical Memorandum is to provide information regarding Domestic Water Use in the Northeast Wyoming River Basins. Under this project, domestic water is defined as water supplied for rural homes, subdivisions, small trailer courts, commercial establishments, parks, campgrounds, rural schools, coal mines (domestic uses at the mines), and other small water users. Municipal water supplies or rural users that obtain their water supply from a municipal source (including Joint Powers Boards (JPBs), Districts and Water Users Associations), are not included in this category. Their water use is addressed under the Technical Memorandum relating to Municipal Water Use. Water usage by the majority of the industries throughout the Basin is addressed under the Technical Memorandum for Industrial Usage.

Existing county populations within these river basins was used as the basis for estimating domestic water use. Year 2000 census information was obtained from the US Bureau of Census, and was the source of these population estimates. Estimates of population served by municipal systems (including JPB's, Districts, and Water Users Associations) covered under the Municipal Memorandum are subtracted from the county populations, to estimate the number of domestic users. Also subtracted are the estimated populations in the portion of counties that are not included in these river basins (e.g., portions of Campbell, Converse, and Niobrara Counties). Year 2000 census information is broken out by county, and further broken out by census districts or a portion of the county. Campbell County is split between both the Northeast River Basin and Powder/Tongue River Basin, therefore the census districts were used to proportion population between the two basins. The locations of the municipal water systems covered under the Municipal Water Use Profile within the county and census district, were then considered. Population served by municipal systems was subtracted from the total population for the area, resulting in the population not served by municipal systems. This is the population that is included in this Domestic Use Memorandum.

This memorandum also considers the subdivisions, small trailer courts, commercial establishments, parks, campgrounds, rural schools, coal mines (domestic uses at the mines), and other small water users, as mentioned above. The Environmental Protection Agency Region 8 Office in Denver was contacted for a listing of the public water systems in these basins. Their records contained 52 public water systems in the basin, other than the systems covered under the Municipal Use Memorandum. A public water system is a system that regularly serves at least 25 people. These systems include community systems (the people live on the system such as a trailer court), a non-transient non-community system (the people don't live there but return there every day such as a rural school or a coal mine), and a transient non-community system (different people use water from the system each day such as restaurant or campground).

While these systems were identified, only a limited amount of additional water use will be included for them. The users of non-transient non-community systems reside on a municipal system or domestic well that is included under those categories, and non-community systems generally only supply a relatively small amount of water to their users. The small community systems will have per capita use similar to municipal or domestic uses, but these are in the minority for the 52 systems. The population served by the systems listed by EPA was 8700. An estimated per capita usage rate of 75 gallons per day will be applied for a total of 652,500 gallons per day, or 731 acre-feet per year. Water rights for domestic wells were aggregated, tabulated, and included on a layer in the basin GIS.

The following tables summarize the estimated rural population for each county using the methods described above.

Converse County: The estimated domestic use for Converse County within the Northeast Wyoming River Basins is 1000. There are no municipal systems within the portion of Converse County included in this river basin. Using a breakout which considers the census districts, as well as portions of the county outside of the river basin, the 1000 estimate was derived.

The total domestic or rural population for the Northeast Wyoming River Basins is estimated to be 8,405. This population is assumed to be served by domestic groundwater wells and to be independent of the population served by municipal water systems covered under the Municipal Use Memorandum. It is assumed this population consumes between 150 and 300 gallons per capita per day. This results in an estimated total domestic water use for the Northeast River Basins of between 1.26 and 2.52 million gallons per day or 1412 and 2825 acre-feet per year. This population represents approximately 18% of the total population within the basins.

As discussed above, the small public water supplies in basins add to the domestic usage. Total domestic usage is summarized in the following table:

The State Engineer Office's (SEO) data base for permitted wells was accessed for information on domestic wells. Data on these wells are included in the GIS for this basin, which may be accessed for information on each well. This data base will be updated periodically. The data fields for these wells contained within this data base include: location (township, range, section, quarter/quarter section), permit number, status, use, applicant name, facility name, whether this is an enlargement of a previous appropriation, priority date, completion date, yield (maximum, actual, claimed), depth, static level, and depth of water bearing zone. Information within these fields is available as provided by the applicant.

Figure 1 illustrates the number and location of domestic wells filed in the SEO throughout the Northeast Wyoming River Basins. Each well is placed on the GIS data layer at a representative location. The dot representing the well may be "clicked" on to access the information available from the SEO.

Permitted well capacity should not be used as an estimate of domestic water use, as the existence of a water right or capacity in the well does not necessarily relate to water use. Typically a well is used only periodically, so the total water pumped in the course of a year is considerably less then it could produce if it was pumped on a continual basis. Also, it might be assumed that a portion of filed water rights such as this are inactive.

The permitted capacity establishes the allowable pumping rate, or resulting total amount of water available by continuous pumping. This is not particularly meaningful since the wells will not normally be operated in this manner. Using the estimated rural population served by wells with estimated per capita usage rates, is believed to be a more reasonable approach for estimating domestic use within this basin. 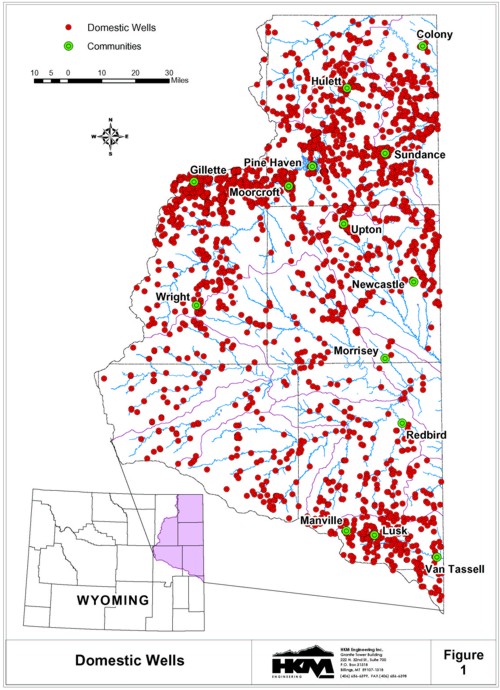