According to the U.S. Environmental Protection Agency (EPA), there are currently 58 active municipal and non-municipal community public water systems in the Wind/Big Horn Basin (Lamb, 2002). Through its water system surveys, the Wyoming Water Development Commission (WWDC) has acquired detailed information on approximately 40 of these public water systems (WWDC, 2002). Information provided in the 2002 Water System Survey indicates these systems are capable of storing more than 36.7 million gallons of water obtained from rivers, streams, wells, reservoirs, and lakes to serve more than 59,000 people, or roughly 87% of the Basin's population. The average daily municipal water use for the Wind/Big Horn Basin (Basin) is approximately 12.2 million gallons per day (MGD), or roughly 207 gallons per day per person.

Within the vicinity of these municipalities are various subdivisions, mobile home parks, water and sewer districts, and water users associations that utilize surface and ground water sources for community public water systems. Riverton supplements its surface water supply with ground water from the Wind River Aquifer, and it represents their sole supply during the non-irrigation season. In addition, Yellowstone National Park utilizes surface water for its visitors to the park.

Information used in the preparation of this technical memorandum was acquired from several different sources and is tabulated in Appendices A and B. For the community public water systems in the Basin that provided information to the WWDC, the 2002 Water System Survey Report provided the basis for establishing their water system capacity and existing use. The EPA public water system database provided the basis for information on the remaining community water systems. To acquire additional information, these systems were contacted by telephone and were asked to complete a brief questionnaire about their system. In a few cases, no information could be obtained on the water system or the data in the WWDC 2002 Water System Survey Report could not be verified.

Based on the listing of public water systems registered with the EPA in the Basin in Table 1, more than 16,000 people rely on ground water sources of supply for their community water systems. Some of these systems obtain water from shallow alluvial wells and/or springs, which may be regulated as ground water under the direct influence of surface water. Roughly 75% of these people are served by ground water delivered from the Towns of Greybull, Dubois, and Worland, and the South Big Horn County Joint Powers Board. The location, population served, and source for these and other community public water systems are listed in Table 1. More detailed usage information is included in Appendix A. Locations of wells that are used for municipal purposes and produce more than 50 gpm are shown on Figure 1.

Of the 58 municipal and non-municipal community public water systems that are located in the Basin, 36 of these systems are serviced by ground water derived from high quality sources in the Basin. These community systems use at least 3.9 MGD on average based on information provided to the WWDC. Peak ground water usage is more than double that amount at 8.8 MGD. Several small communities report low average per capita use ranging from 40 to 70 gallons per capita per day (GPCD), while the Towns of Greybull and Ten Sleep reportedly use the most on average ranging from 450 to 500 GPCD. Peak usage per capita ranges from 48 GPCD in the North Riverton Water & Sewer District to 1,500 GPCD in the Town of Ten Sleep. Several of these systems are unmetered and per capita usage could not be verified.

Based on the listing of public water systems registered with the EPA in the Basin in Table 2, at least 43,000 people in the Basin rely on surface water sources of supply for their community water systems. While 22 public water systems service residents of the Basin with surface water, only seven sources that are controlled by various entities are utilized for supply. These sources include the Middle Popo Agie River, Wind / Big Horn River, Wood River, Buffalo Bill Reservoir (Shoshone River), Gardner Creek, Panther Creek, and the Firehole River. Lander and Thermopolis divert water for their own use and supply other entities. The largest surface water diversion is the Shoshone Municipal Pipeline that obtains water from Buffalo Bill Reservoir and distributes water to roughly 21,000 people downstream along the Shoshone River. Riverton, Meeteetse, and Yellowstone National Park all divert surface waters for their own water supply use. Of the municipalities in the basin, Riverton is unique in that the town supplements with ground water during the summer months and exclusively uses ground water for municipal supply during the non-irrigation season. The location, population served, and source for these community public water systems are listed in Table 2. More detailed usage information is included in Appendix B.

The 22 municipal and non-municipal community public water systems that are located in the Basin utilize a substantial amount of water to supply both average and peak demands. These community systems use an average of 8.3 MGD based on information provided to the WWDC by the community public water systems. As with ground water sources, peak surface water usage is almost more than double average use and is approximately 16.2 MGD. On a per capita basis, the Mammoth Hot Spring system within Yellowstone National Park reportedly uses the least amount of water at an average rate of 10 GPCD, while the City of Thermopolis uses the most on average at 530 GPCD. Peak usage per capita ranges from 100 GPCD at Mammoth Hot Spring to 1,136 GPCD in Meeteetse. Again, several of these systems are unmetered and per capita use could not be verified.

All depletions reported in gallons per month.
Augmentation to river flows from ground water sources are indicated by ( ) symbols.

While seven entities obtain their municipal water supply from surface water sources, most of the 22 community water systems that are actually served return water from their wastewater treatment facilities to the stream from which they obtained their supply. The impact of this practice upon surface waters can best be determined by assuming that depletions in streamflow are equal to the unit amount of the diversion minus the unit return flow to the stream. In several instances, municipal return flows, however, actually augment streamflow because those municipalities obtain their water supply from non-tributary ground water sources. Shown in Table 3, the estimated surface water depletions were calculated on a monthly basis to accommodate the modeling efforts for this planning study. These estimates of monthly diversion and wastewater discharge were developed from information provided by each community system. Only actual wastewater point source discharges have been considered in this analysis.

Surface and ground water resources within the Wind / Big Horn Basin are utilized to serve more than 59,000 people, or roughly 87% of the Basin's population. The average daily municipal water use for the Basin from all sources is nearly 12.2 MGD, or roughly 207 GPCD. Surface water is utilized to supply 68% of the average water use for 22 municipal and non-municipal community public water systems in the Basin. Ground water is used to supply 32% of the average water use for 36 public water systems, including the Towns of Greybull, Dubois, Basin, and Worland.

Based on EPA and WWDC data, it appears that the majority of the municipal and non-municipal community public water systems in the Basin have sufficient water to meet their current needs. However, it appears that Lander and Hudson may have insufficient water treatment and potentially water storage based on peak usage volumes. While it appears the municipal entities have sufficient water, Lander and other entities have expressed concern about the susceptibility of their water resources to drought periods. Certain groundwater dependant towns are concerned about declining water levels, storage capacity, well interference, and most importantly, well redundancy. For this reason, several municipalities have sought alternative water sources to supplement their existing sources. 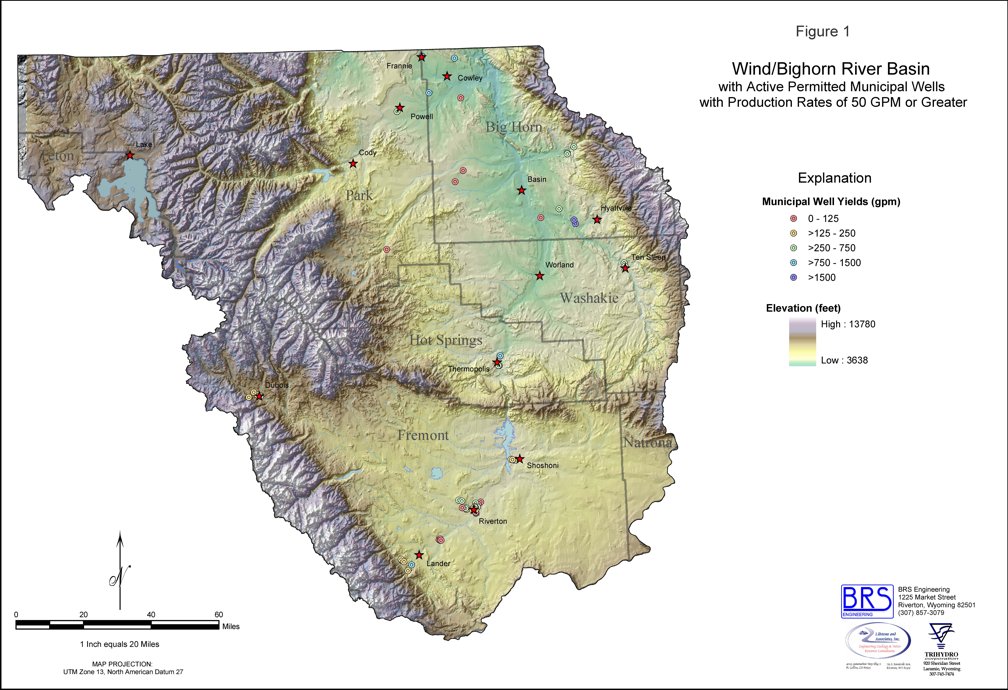