This memorandum contains the following sections:

Section 1 - Introduction
Section 2 - Industry in the WBHB
Section 3 - Summary of Consumptive Use
Section 4 . Projected Industrial Use

Most industrial water users in the Wind/Big Horn Basin (WBHB) are comparatively small companies, with relatively low water needs. In most cases, these companies draw their water from municipal systems, or from their own wells. In many cases the water used from wells for industrial purposes is not suited for other uses due to poor water quality. For those industries utilizing water from municipal sources, that consumptive use is included in the basin as municipal use.

Section 2 - Industry in the WBHB

Large manufacturing companies are rare in the WBHB, as they are in the state as a whole. In the WBHB there are about two-dozen manufacturing companies that consistently maintain a workforce of twenty-five or more [Phillip Christopherson, Andy Rose, MAMTEC, Riverton and Powell]. Most of the larger companies. products are related to Wyoming.s overall character . products derived from minerals, products for agriculture, products for camping, hunting and fishing. However, machinery electronic goods, and fabricated metal products are also manufactured in the Basin

Hydroelectric power is produced by water-driven turbines at thirteen Bureau of Reclamation sites in Wyoming, six of which are in the WBHB. Collectively the six WBHB plants have a production capacity of 47,100 kW.

Currently there are no commercial fossil fuel power generation facilities in the basin. Small gas-fire, gas-cooled, turbine generating stations are utilized in the oil and gas industry for internal use such as powering gas pumping stations.

Oil and gas remain important to the WBHB economy, with gas plants in all counties except Hot Springs, but it seems unlikely that the future will offer many more jobs in the industry.

The future for uranium mining appears to be in-situ development, in which wells, rather than open-pit mines, produce the ores. The wells produce non-potable ground water most of which is re-injected into the aquifer, resulting in a net consumptive loss of approximately 5%. One potential future in-situ uranium mine is permitted but not in production in the Gas Hills Uranium District, Fremont County. The projected plant capacity is 8,000 g.p.m. or 12,906 AF/yr. Of this total, 645 AF/yr of water would be consumed (lost to evaporation) during the mineral processing. The remaining water used would be returned to the aquifer via ground water injection wells.

Bentonite processing plants are located in Big Horn (Greybull and Lovell) and Washakie (Worland) Counties. The Black Hills Bentonite plant in Worland uses about 500,000 gallons per month(18.5 AF/yr), purchasing it from the City of Worland. Similar bentonite plants in the basin include WyoBen.s plant near Greybull and American Colloid.s plant near Lovell. Plant operators did not indicate any specific plans to expand or contract in the foreseeable future.

There are gypsum plants in Park and Big Horn Counties, producing wallboard. Well water is used in the process, and recycling is practiced in all plants. These plants consume 200 g.p.m. or 323 AF/yr, based on water rights.

Section 3 - Summary of Current Consumptive Use

Total water use based on water rights follows and is graphically displayed on the subsequent figure. Although this is the total water right, much of the usage is non-consumptive. 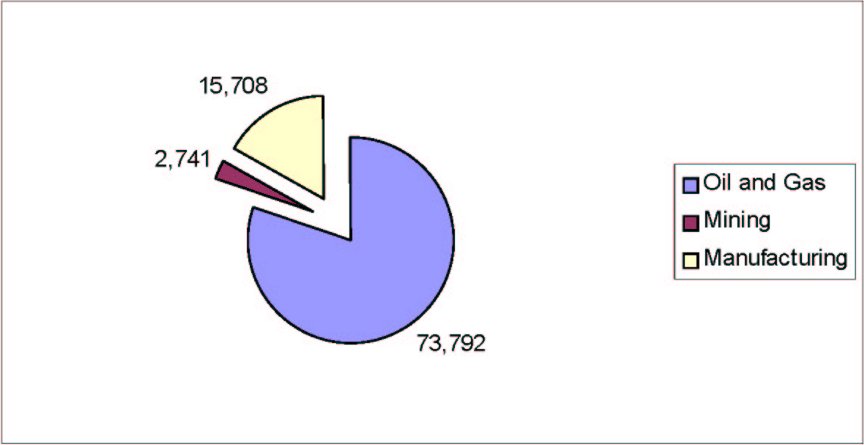 Industrial growth in most sectors has remained flat or declined. Potential for future growth in manufacturing is tied to improvements in the basic infrastructure. Mining and Oil & Gas has generally declined in recent decades. Some potential for coalbed methane development and in-situ uranium does exist. However, such developments will be market driven. Coalbed methane reserves in the Powder River Basin greatly exceed those of the Wind River and Big Horn basins in both quantity and quality. Future uranium production is tied to global demand. As with coalbed methane, current uranium production comes from lower cost mines located outside the basin.

One area of potential industrial development and growth is the realm of power generation. There are several sites that could produce limited amounts of hydropower, a non-consumptive water use. Although there are currently no fossil fuels power plants in the Basin, there is a potential reserve base for either coal or natural gas fired electric power production. It is estimated that a nominal 200 MW coal-fired steam turbine facility would require approximately 4,000 acre-ft/year of water and a 500 MW gas-fired combination turbine facility would require approximately 5,000 acre-ft/year of water. 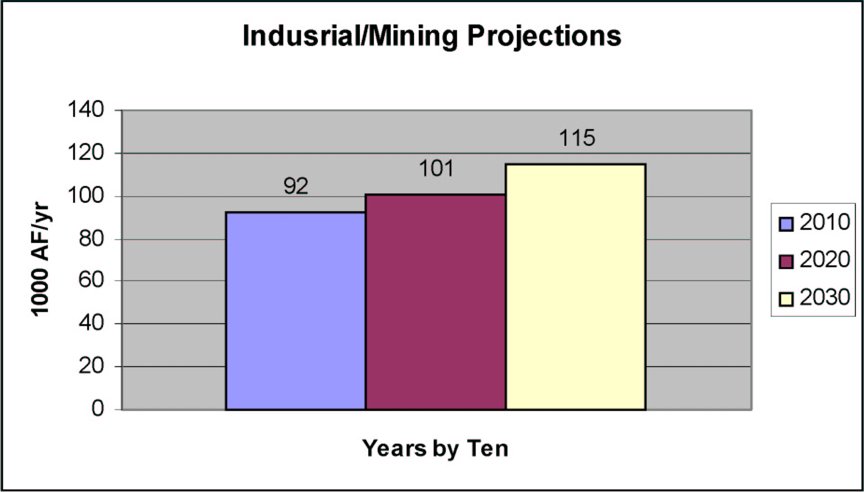